Cap’n Jack LOVES dessert. In fact, when the revolution comes, he believes that among the first against the wall will be those “Frenchy people” who think that it is a good idea to serve cheese for dessert instead of chocolate. If you are a poor speller like Cap’n Jack is, you probably have a problem remembering if it is “desert” or “dessert.” The old way to remember the spelling was “you only want to cross the deSert once but want to eat deSSert twice.” If you grew up as Cap’n Jack did, where dinner on Sunday was an actual hot fudge sundae (thanks Mom!), you know that the proper spelling should have been “deSSSert.” So it is with great adieu (wacka-doo wacka-doo) that Cap’n Jack introduces his newest section of Cap’n Jack’s Tiki Bar, “Desssert Cocktails.”

When the winds blow cold and the seas grow rough, Cap’n Jack reaches for his trusty Pirate Noggggg (so good it needs extra G’s). Not a fan of traditional eggnog, Cap’n Jack has rummed it up a bit with a dash of other ingredients poached during his spice runs in the Caribbean. This drink will warm you to your toes even if you are in the frostiest of harbors.

2 oz organic eggnog (get the best you can find)

3/4 oz honey syrup (like simple syrup, but made from honey)

Pre-chill cocktail glasses in the freezer for at least 10 minutes. Pour all ingredients into a cocktail shaker, add ice cubes, and shake vigorously until 5he cocktail shaker is frosted over. Pour into the pre-chilled cocktail glasses, sprinkle a dash of ground cinnamon and ground nutmeg onto the top of the glass, and serve immediately. This drink is best when ice cold, so don’t dawdle…just start making the next round – you can count on requests for more.

It has been said, by those wiser than Cap’n Jack (actually, almost everybody is wiser than Cap’n Jack), that when life hands you lemons, make lemonade. Turning disaster into triumph, or at least survival, can be one of life’s pivot points. And turning lemons into limoncello can be your dinner’s dessert pivot point. Fortunately, Cap’n Jack had an old relative named Christopher, who a few hundred years ago in an attempt to see what was on the other side of the ocean, bumped into a new continent that had yellow fruit with a sour taste. On the way home to the Old Country, the lemons fermented and created a sweet nectar (another of Cap’n Jack’s relatives, Cap’n Cook, was the first to use citrus successfully to ward off the the voyager’s problem of scurvy). Where did the name come from? Christopher would sip the magic mix while listening to his cousin Bernie play the cello. Voula! The modern limoncello was born. Better plan in advance though…this takes at least 6 weeks to make.

A bunch of smaller bottles

Okay then, a Magic Marker

This is not the time for low-grade lemons…spend a little more and get them at a high-end grocery store like Whole Foods, and select organic lemons that are bright yellow with perfect skin. Using a microplane grater (a vegetable peeler is an imperfect second choice), remove only the lemon’s yellow zest, leaving as much of the bitter white rind on the lemon as possible. Put the zest in a large glass jar with a wide lid, and then ad one of the 750 ml bottles of vodka to it. Seal it very tightly, and give it a shake every day. You will soon start to see the clear vodka turn yellow as it absorbs the zest. Keep and eye on it, and in about a month, the zest will be almost white and the vodka will be a bright yellow. Pour everything through a few layers of cheese cloth (a very porous cloth napkin will do in a pinch) into a large bowl. Squeeze out all of the liquid out of the zest that is in the cheese cloth until it is bone dry. Don’t immediately get in your car and drive as you will never explain the source of the alcohol smell on your hands if a cop pulls you over. Add the second 750 ml bottle of vodka, and then combine the sugar and water in a pan over medium heat until the sugar has melted; just before the mixture starts to boil is a good time to turn off the heat. Let the liquid cool completely and then add it to the vodka. Put everything back in the large bottle, seal it up tightly, and let it set for at least two weeks to mellow. The longer you wait, the smoother it will be. Finally, pour the limoncello into several smaller bottles, add your own label, and put them in the freezer. Limoncello should be served VERY COLD, and sipped, not gulped!

For those who need at least 12,347,927 calories as part of their after-dinner regime, there are fewer drinks more able to deliver the synergistic calorie intensive combination of chocolate, macadamia nut, coconut and bananas. So with a nod to the fact that you have already had at least two of Cap’n Jack’s original recipe cocktails before dinner, LOTS of water during dinner (please, no wine or beer…that just confuses your palette!), and are in need of something sweet yet alcoholic instead of a bowl of imitation frozen dairy dessert masquerading as ice cream, and are at this point capable of combining only four things into a cocktail shaker, this is the recipe for you: 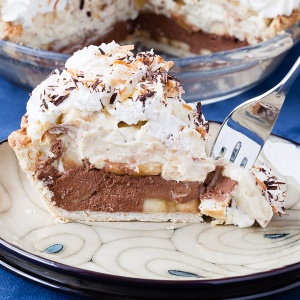 What if you could put a slice of chocolate coconut macadamia nut banana pie into a cocktail glass?

Pre-chill a cocktail glass (aka, martini glass) in the freezer. Combine all ingredients with crushed ice in a cocktail shaker, shake like you’re having a seizure while your fingers are about to fall off from frostbite, and pour it into the cocktail glass. Grate some dark chocolate to dust the top of the drink, or toss in a slice of coconut. Or a slice of banana.  Or a Snickers bar. Jeez, if this is your third or fourth cocktail, does it really matter? You’ll probably drop the glass anyway and have to start from scratch. After your first drink, and assuming you have maintained consciousness up to this point, experiment on which of the four flavors you want to dominate the drink. Do you like the macadamia nut flavor, and want to make sure you can taste it after spending Forty Frickin’ Dollars for the bottle? No problem, just add more macadamia nut liqueur and a little less banana liqueur. “A third desssert cocktail?  Don’t mind if I zzzzzzzzzzzzzz.”