The original economy of North America, in the very earliest days when Mother England was still in charge, was based on the tragic triad of slaves, sugarcane, and rum.  Slaves were brought to the Caribbean islands to grow and harvest sugarcane to make sugar, the waste product of molasses was fermented to create (very awful tasting) rum, which was shipped to the Colonies and the UK for sale.  The proceeds were used to buy more slaves, and continue the cycle.  Because the original rum was better suited for stripping paint off of ship bottoms than for drinking, sugar was added, along with water, in an attempt to mute the pain of drinking it.  After Captain James Cook’s first voyage returned without a single loss of life due to scurvy (the very first time this had ever happened), lime juice was added.  In fact, the term “Limey” for British sailors came from the fact that all His Majesty’s sailing crews had to eat limes on their voyages.  While most Studio 54 disco dancers think of a daiquiri as a 7-11 Slurpee with rum in it (which is why most people do not like daiquiris), the original recipe stands up hundreds of years later.  After putting a cocktail (martini) glass in the freezer, mix the following in a cocktail shaker: 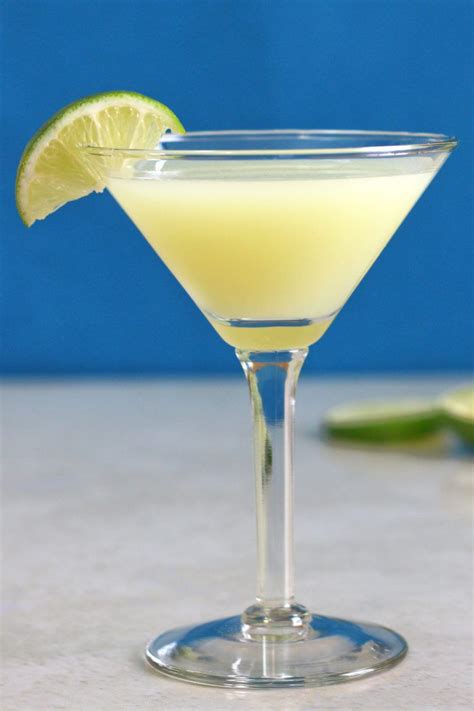 Shake the ingredients like mad, far longer than you want to.  You are not just chilling the drink, you are aerating it and diluting it.  When your hand is about to stick permanently to the cocktail shaker, pull out the pre-chilled cocktail glass and pour the daiquiri into the glass, shaking it to get every blessed drop out, and also creating a bit of foam on top, then add a slice of lime.  Still think the daiquiri is a sissy drink?  Hemingway drank them by the gallon at the El Floridita Bar in Havana.  Pappa ain’t no sissy.

Originally created by Cap’n Jack when he served it to Ernest Hemingway in Havana, this classic cocktail was stolen by Cuban bartenders years before Cap’n Jack was born.  If you understand that mixed up timeline, you are obviously on your third Mojito.  Try to drink just one!  (updated 3/27/13)

Put a thin layer of crushed ice in the bottom of the glass, followed by the lime, mint leaves, and topped with the sugar.  Use a muddler to grind the sugar into the mint leaves and lime rind.  Add the rum (Cuban is more authentic if you have it), add crushed ice to fill, and add a lime wedge and mint sprig on top.

Some sights, smells, or songs can bring you back to a moment that seems like it happened yesterday, and so it is with The Prado in San Diego’s Balboa Park.  Start with a beautiful open air restaurant, add a 6’2″ redhead with 6″ heals, a miniskirt, and legs that go all the way up to, uh, there.  Add one (or two, but really three) (okay, four) Apple Mojitos and you create a memory that cannot be erased no matter how many times Cap’n Jack watches “The Eternal Sunshine of the Spotless Mind.”

Put a thin layer of crushed ice on the bottom of the glass, add the lime, sugar, mint, and apple, in that order.  Use a muddler to turn the apple into a pulp and also to grind the sugar into the lime skin and the mint leaves.  Add the rum and club soda (you can substitute Sprite if desired) and the sweet & sour.  Do yourself and your guests a favor and don’t buy commercially produced sweat & sour – it is almost always high fructose corn syrup and artificial flavors.  You can make your own with one part sugar and one part fresh lime juice, heated in a pan until it just barely boils.  If you make more than you need for then next day or two, let cool, add a small amount of vodka as a preservative, and refrigerate.  Can you drink just one?  Nope, I can’t either.  Nor can I get the redhead completely out of my mind…

The national drink of Brazil, Cap’n Jack had his first Caipirinha at the Velosa bar, where “The Girl from Ipanema” was written.  The base spirit is Cachaca, made from sugar cane (rum is made from molasses), and the version sold in Brazil is twice as strong as the version sold outside the country.  Cap’n Jack knows this, as although he remembers his first Caipirinha, he has no memory of his second one.  (updated 3/27/13)

Place a thin layer of ice to the bottom of a glass, add the quartered lime and top with sugar.  Use a muddler to grind the sugar into the lime; work it hard to release as much of the zest from the lime rind as possible.  Add the  cachaça, and top with ice.  Genial Brazilian hosts will often dip the glass’s rim in sugar to soften the strong flavor of the drink if they find out you are an American.

I know, I know….  When you think of daiquiris, you think of the days of cheesy disco clubs, fern bars, and Slurpee + rum concoctions.  While this may have turned the American-style daiquiri into a train wreck of polyester-based dating rituals, the original goes back to a little hole-in-the-wall bar that some ex-pat author called Ernest used to frequent.  When not writing about old men and the sea, he was known to down more than his share of this 1934 recipe.  (updated 6/14/13)

The original recipe, with no 7-11 Slurpee machine in sight

Pre-chill a cocktail glass in the freezer.  Combine all ingredients in a cocktail shaker with crushed ice, stopping only when you have a healthy fear of frostbite.  Pour cocktail and crushed ice into the pre-chilled cocktail glass and dream of the day when Americans can freely travel to Cuba to get the real thing.

Why would anyone drink squashed grapes?  Wine is traditionally served in a wine glass, without fresh lime juice, a paper umbrella, or a plastic palm tree stir stick.  How tacky is that?

Are you kidding?  Get the hell out of my cyber-bar, you pansy!

The only decent American beer.  Depending on your view of history, and the Sugar Barons who stole Hawaii from the natives (okay, now you know my take on this shameful part of American history), this is not truly an American beer.  But it comes from Hawaii, and Cap’n Jack’s Hawaiian roots go back to when he was 7 years old and his dad came to his school during lunchtime and asked him, “If you could go anywhere in the world, where would you go?”  You probably already figured out that he answered “Hawaii,” and so off they went. So while Cap’n Jack always recommends a Tiki drink, he will also gladly serve you a Longboard Lager.

Not necessarily a great beer, but there is nothing like having a Hinano in one hand and the boat’s tiller in the other while sailing through the pass of Bora Bora on your way to anchor off the Oa Oa Yacht Club.  From such moments come many of Cap’n Jack’s most devious smiles.  Or possibly that distant look in his eyes as he remembers all the wonderful things that the outer islands of Bora Bora, Raiatea, Taha’a, and Huihini are.

When all else fails.

Don’t even THINK about it.  In fact, LEAVE.  Right NOW.

Cap’n Jack’s son, Swabbie Grayson, always joins in with a Tiki drink.  Substitute 7-Up for the alcohol, double up on the fruit juice and garnishes, triple the cherries (Cap’n Jack always has multi-colored and multi-flavored versions of maraschino cherries), clink the glasses (or in this case, the pineapples) together, and away we go!